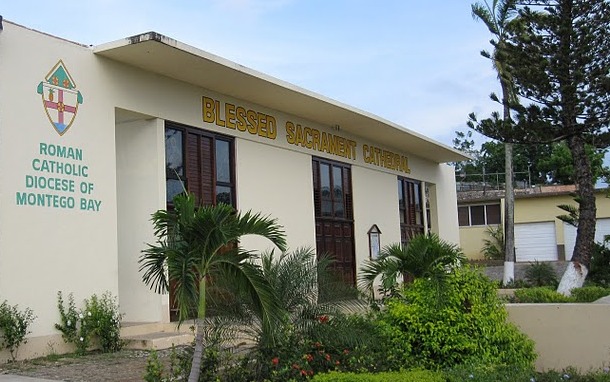 The diocese of Montego Bay is made up of five civic parishes: St. James in Montego Bay, Trewlany in Falmouth, St. Ann in St. Ann’s Bay, Westmoreland in Savannah-la-Mar, and Hanover in Lucea.

Of the three Roman Catholic dioceses in Jamaica, the diocese of Montego Bay is the largest in land area spanning 1,500 sq. miles.

Pope Paul VI selected Edgerton Roland Clarke as the first bishop of Montego Bay. Clarke was born in 1929 and was ordained a bishop upon the inauguration of the diocese of Montego Bay. He served in Montego Bay from 1967 until his election as Archbishop of the archdiocese of Kingston in 1994.

Pope John Paul II elected Charles H. Dufour as the next bishop of the diocese, where he has been serving since 1996. Dufour was born in Kingston on April 15, 1940. He was ordained a priest in August 1970, and then went on to be appointed bishop and ordained bishop on Feb. 10, 1996 at the Blessed Sacrament Cathedral in Montego Bay.  He was appointed Archbishop of Kingston on April 15, 2011.

The Holy Father, Pope Francis appointed Father Burchell Alexander McPherson, until now Pastor of Sts. Peter and Paul in Kingston, as Bishop of Montego Bay, Jamaica on April 11, 2013.
The Bishop-elect was born in Mavis Bank-St. Andrew in the Archdiocese of Kingston, Jamaica, on 7 May 1951. After elementary school at Hall’s Delight, he attended high school at St. George’s College evening Extension. In 1976, at the age of 25, he converted to Catholicism. He took part in associations for Catholic youth, and was named Lay Administrator of the parish of St. Pius X. In 1986 he was ordained a permanent Deacon, and, in 1988, entered the St. Michael’s Major Seminary. On 23 June 1991 he was ordained a priest for the Archdiocese of Kingston.
Since his ordination, Father McPherson has held the following positions:

1991-2007: Pastor of the large, but poor parishes of St. Pius X and St. Peter Claver in Kingston, From 1998: Named a member of the College of Consultors From 2004: Appointed director of the important Foundation

Food for the Poor

in Jamaica, and a member of its administrative council From 2007: Pastor of the parish of St. Peter and Paul and the Mission of St. Martin de Porres in Kingston.

Not every parish in the Montego Bay Diocese is able to have a full-time priest available. Many parishes rely on missionary priests to aid in the celebration of Mass and the sacraments. The list of parishes includes the name of the full time pastor if available.